Zest for DOT literacy in the Eclipse Javadoc view

Edit: Hello Planet Eclipse! I'm very happy to be newly syndicated here, and just in time for the new year! I've been developing Eclipse bundles for study and research projects and for private stuff since around 2004. Last summer, I got more involved with Eclipse itself by participating in the Google Summer of Code at Eclipse. This post about an idea related to my SOC project sort of made me show up here so I thought this makes sense as my first post. A great 2010 to everyone! Recovering a little from playing the awesome Tales of Monkey Island on the Wii during these wonderful days between the years, I picked up an idea I originally had while working on dot4zest during the Google Summer of Code at Eclipse. I was listening to an episode of the Stack Overflow podcast where Jeff and Joel discuss killer IDEs and the lack of visualization in today's IDEs. Given my general interest in literate programming I thought hey, these DOT-to-Zest transformations I'm working on could be used to include Graphviz DOT graphs in Javadoc comments, and have them automatically visualized with Zest in the Eclipse Javadoc view. So the other day I put the Bundle spy to work, cloned the org.eclipse.jdt.ui Git repository, downloaded Helios and now I've got something running that while super rough around the edges, basically does that: 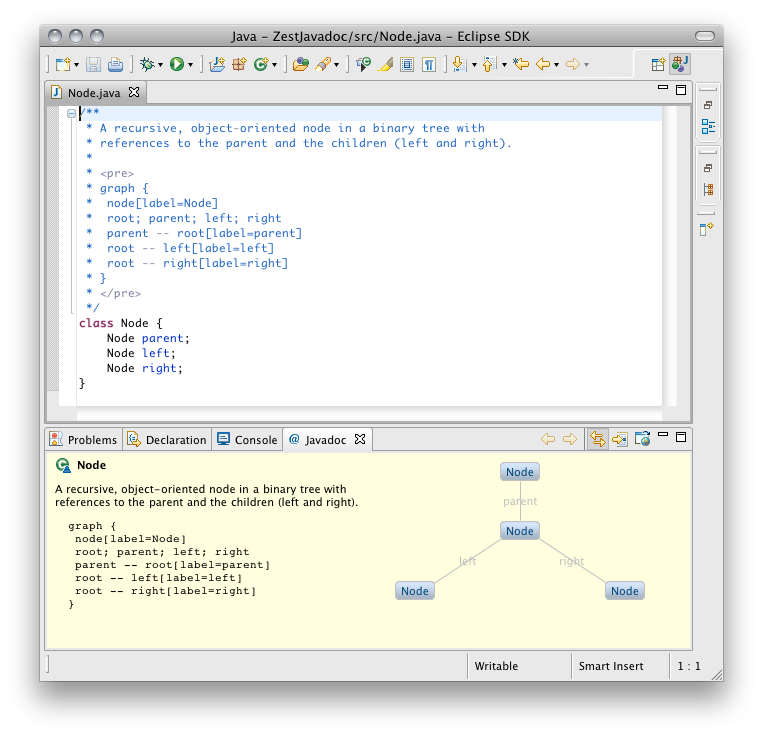 Playing with this I had some ideas on how this could possibly be further integrated, like refactoring support (e.g. rename, just like it works for @param Javadoc comments), automatic highlighting of Zest graph nodes for selected Java elements, or animation support. So is this just nuts or could it be a pragmatic kind of tooling for some literate programming?